Neovit Superaminoextra is among NEOFARMA’s most demanded and most successful products all over the world.

This result has been achieved thanks to its specific formulation and to its practical use.

Neovit Superaminoextra contains all the necessary vitamins and amino acids to support the animal’s growth and wellness even during high-productive periods. The amino acids supply has been determined keeping in mind the limiting amino acid concept: 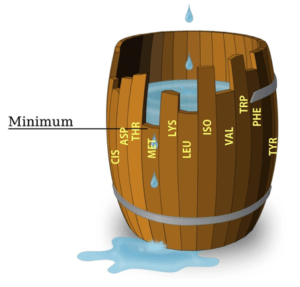 The great advantage of Neovit Superaminoextra is given by its versatility. In fact the product can be introduces in drinking water as line supplement, but it can also be used to intervene selectively in case of vitamin or protein deficiency, since its liquid composition allows to treat easily specific groups of animals, not just the whole herd.

Neovit Superaminoextra has reached great results in fighting against heat stress, as it leads to an increased feed intake.

Feed intake depends on numerous factors, among which the main important ones surely are:

As the temperature rises the feed consumption decreases progressively, this may lead to a possible critical situation for all high productive animals, as well as for those animals that already are in unstable health conditions and therefore are weak.

On the contrary, as the temperature rises water consumption rises as well 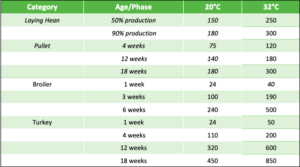 These data allow us to understand how easily we can intervene by using Neovit Superaminoextra not only in groups of animals to support them during high productive phases, or in case of hot weather conditions, but also in those animals showing poor health conditions or illness that are in need of vitamins and proteins supplementation.